The Load-Flow computation module is used to evaluate the steady-state of the network: voltage profile, power flows and losses in branches, balance between generation and load, etc.

The Load-Flow module included in SMART FLOW employs a Newton-Raphson algorithm and can be launched from the GUI or from the Network Editor. An optional three-phase short-circuit current computation at each node can also be activated.

Results are also provided in an output listing file, presenting detailed results (voltage at each node, flows, etc …) as well as global summaries (balance per region, area interchange fluxes, etc…). List of problems such as nodes under-voltages or branch overloads are reported.

This tool is available for both AC (non-linear) and DC (linear) load flow calculations. 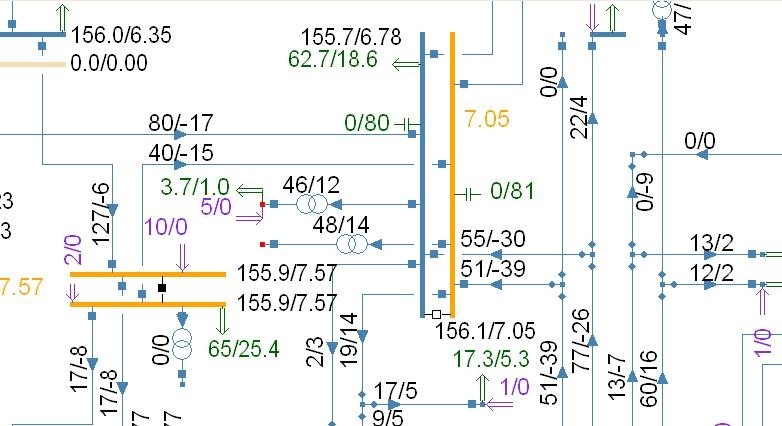 Static security assessment (N-X criterion) is a basic validation of network security. This module allows a quick and easy check of the static security of a state before any advanced dynamic analysis.

Trigger of each type of equipment can be specified while several mechanisms are available to fit at best the behaviour of the network: 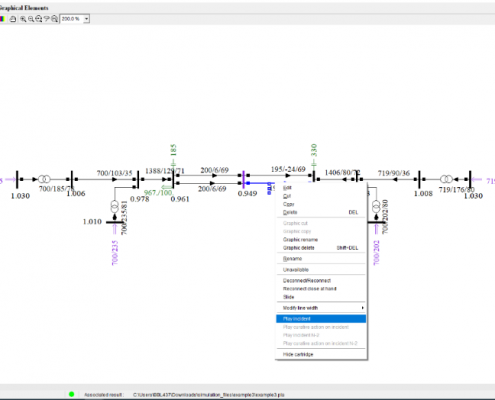 An easy way to simulate and analyse the loss of all equipment in a region is to use the generic outage definition; generating the loss of each equipment of the region one by one. N-1 or N-2 outages can also be specified via the Network Editor.

The post-contingency state can be visualized on the Network Editor. A pre-defined colouring criterion shows voltage problems and overloaded branches. User-defined criteria are easy to implement.

Voltage problems, branch overloads and detailed results (voltage at each node, power flows on branches) are generated for each outage.

This tool is available for both AC (non-linear) and DC (linear) load flow calculations.

Used for the design and validation of network protection devices, the short-circuit computation module calculates a static short-circuit at one node of the network and evaluates power flows and currents.

Meeting the IEC 60909 standard requirements, this computation module allows symmetrical analysis as well as unsymmetrical computation, with a phase by phase description of the fault.

For an easy definition of short-circuit computations, a generic outage simulating a short-circuit at each node of a given region is available.

Synthetic results, giving power flows and short-circuit currents phase by phase, can be displayed and analyzed on the Network Editor. Colorization of equipment is determined by a predefined or a user-defined criterion.

The static network reduction tool included in SMART FLOW offers an advanced reduction method known as the REI-DIMO (Radial Equivalent Independent) method. Groups of specified nodes are deleted while equivalent branches and injections are automatically created. The main advantage of a REI-DIMO equivalent is the preservation of voltage profile and losses, while other elimination methods do not preserve the representation of network losses.

Result files are generated in both ASCII and binary format, fully compatible with other SMART FLOW modules. An incremental file defining differences between the initial network and the reduced one is also available.

IPSO is used to improve the efficiency and the performance of a power system by adding intelligence to the operational process. Where competing algorithmic requirements of large interconnected systems, in terms of speed and precision, make the choice of the right Optimal Power Flow (OPF) functional specifications and solver method a challenge, IPSO is automatically your best and most intelligent tool.

To optimize the profitability of investments or minimize operating costs through improved knowledge of markets, security margins and risks, ENGIE Impact pioneered the advanced algorithmic calculations behind the models needed for informed decision-making. Duly tested, improved, and fully developed as commercial software, IPSO offers one of the most secure and accurate tools for rapid power system optimization.

IPSO improves the efficiency of your power system studies. It avoids the tedious and manual search for a “best possible solution” via repetitive load flow runs requiring several manual and time-consuming modifications. From any reasonable starting point, IPSO automatically adjusts controls to provide you an optimal solution satisfying the imposed constraints while minimizing the cost function.

The following features of IPSO must be highlighted:

This site uses cookies. By continuing to browse the site, you are agreeing to our use of cookies.

We may request cookies to be set on your device. We use cookies to let us know when you visit our websites, how you interact with us, to enrich your user experience, and to customize your relationship with our website.

Click on the different category headings to find out more. You can also change some of your preferences. Note that blocking some types of cookies may impact your experience on our websites and the services we are able to offer.

These cookies are strictly necessary to provide you with services available through our website and to use some of its features.

Because these cookies are strictly necessary to deliver the website, refuseing them will have impact how our site functions. You always can block or delete cookies by changing your browser settings and force blocking all cookies on this website. But this will always prompt you to accept/refuse cookies when revisiting our site.

We fully respect if you want to refuse cookies but to avoid asking you again and again kindly allow us to store a cookie for that. You are free to opt out any time or opt in for other cookies to get a better experience. If you refuse cookies we will remove all set cookies in our domain.

We provide you with a list of stored cookies on your computer in our domain so you can check what we stored. Due to security reasons we are not able to show or modify cookies from other domains. You can check these in your browser security settings.

We also use different external services like Google Webfonts, Google Maps, and external Video providers. Since these providers may collect personal data like your IP address we allow you to block them here. Please be aware that this might heavily reduce the functionality and appearance of our site. Changes will take effect once you reload the page.